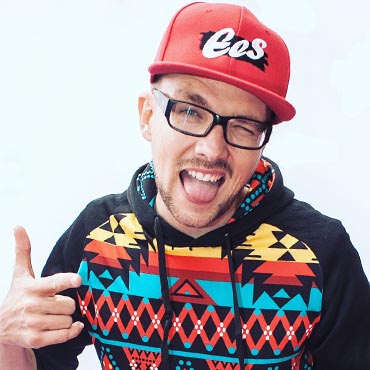 From Namibia to South Africa to Germany, Eric Sell a.k.a. EES, is moving up in the world and at a rapid pace. With 9 CD’s under his belt in just 8 years, it is obvious that he has ambition and is not about to slow down. His music style is a blend of Kwaito, African House, Afro Pop, Reggae, and has a really funky fresh spin to it. EES was born and bred in Namibia, and started to slowly get into the basic business of music in the beginning of 2001, creating a unique African vocal singing style.

EES discovered his love for music when he was in Cape Town while doing his Diploma in Sound Engineering. At the end of 2003 EES finished his studies and at the beginning of 2004 he went to Europe to introduce and improve on his music skills while trying to promote African music at the same time in Europe.
Ever since he has be making a massive impact for Kwaito music outside of Africa and has received several awards of recognition including the MTV Listeners Choice award. His latest HIT Album release is the 22 Track, Totally African Pop “NAM Flava!” Sound Album called “Authentic Rebel” featuring a great selection of African Artist! It is the First Namibian Album to be sold internationally via music web services. Another Highlight is that EES just released his own energydrink called “WUMA” (www.wuma-drink.com).

Something that is truly fantastic is that despite working hard in Germany to make a name for himself overseas, EES has never lost touch with his roots. He is proud of his home, NAMIBIA, and makes that statement clearly not only in his music and his clothing line (EES WeaR) or in his music videos but in the way he lives as well. He proudly wears his country and his home town on his sleeve and not only in the figurative sense but literally as well. In his lyrics you can clearly hear the Afrikaans/English/German influence, and just when you thought it could not possibly get any better it does. EES in his early 20’s produced most of his music himself under his own label by the name of NAM FLAVA Music label.
All in all EES is a very outgoing person who just wants his listeners to enjoy his music and experience what he lives for, Yes-Ja! – NAM Flava Music!